Are increased vaccinations a genuine sign of hope this Easter? 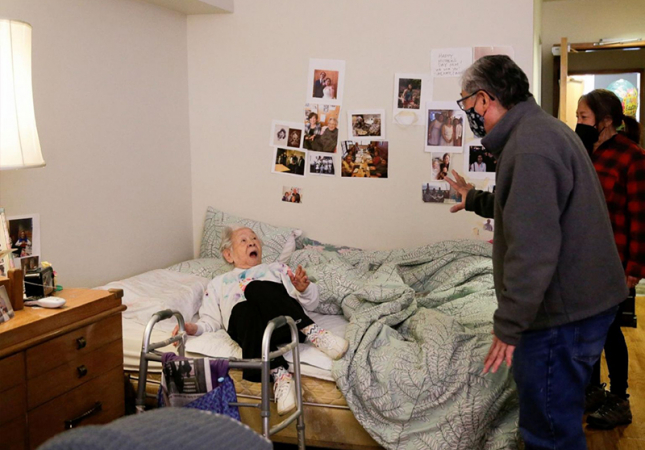 Yoshia Uomoto, 98, of Seattle, reacts as her son, Mark Uomoto, and niece, Gail Yamada, surprise her with their first in-person visit in a year March 30, 2021, after indoor visitation restrictions due to the coronavirus disease were lifted at Nikkei Manor. Residents who have been fully vaccinated can visit with family one hour at a time. (CNS photo/Lindsey Wasson, Reuters)

WASHINGTON (CNS) — It’s been said before, in different ways, in different contexts: “the beginning of the end,” “light at the end of the tunnel,” “our long national nightmare is over,” and so on.

But, as the coronavirus pandemic enters its second year, the increasing number of vaccinations may qualify as an authentic sign of hope as the Easter season draws upon us.

President Joe Biden’s target of 100 million shots in the first 100 days of his presidency was eclipsed at the halfway point. The total number of vaccinations injected in Americans through April 1 stood at 153,631,404, with 3,358,112 doses administered April Fool’s Day — and that’s no joke.

Ascension Health, one of the largest Catholic hospital chains in the United States, has administered 750,000 doses of the COVID-19 vaccine and has held mass vaccination clinics in several of its markets, according to a March 30 email to Catholic News Service from Nick Ragone, Ascension executive vice president and chief marketing and communications officer.

The demand for shots crashed the vaccine registration sites of many jurisdictions. With those problems largely fixed, the supply is rising to the point where governments are preregistering broad swaths of the population — sometimes those as young as 16 — instead of the demographic slivers that characterized the early vaccine rollout.

West Virginia, population 1.8 million, the last state to report its first COVID-19 case — had administered 450,000 doses through Feb. 21, with 9% of its residents having received both doses of either the Pfizer or the Moderna two-shot regimen. If West Virginia were its own country, it would have ranked third in the world at that time.

The Mountaineer State passed on website registration, since many of its older residents have either little computer savvy or a stable internet connection, choosing instead to make reservations by phone. West Virginia also eschewed vaccine sites at chain drugstores and supermarkets, opting for county and local health departments.

Even the economy offers signs of hope. The federal Labor Department’s monthly first-Friday jobs report April 2 showed a gain of 916,000 jobs from the month before.

“It is a very positive jobs report, very strong — much stronger than anticipated — by me and by many other economists,” said Nicole Smith, chief economist at Georgetown University’s Center on Education and the Workforce. Smith said she was figuring on about 500,000 jobs being added to the economy, but instead nearly twice that figure was reported.

What does this reflect? Hope. Smith used the word “optimism.” And the source of that optimism? “Americans are now being vaccinated,” she replied, “so they feel more confident about going out there and actually working.”

Women did particularly well in the past month, as employment in the hospitality and restaurant fields surged, Smith noted. There is more reason for hope, she added, as the $1.9 trillion American Rescue Plan bill was signed into law in March, and Biden has proposed a $2.2 trillion American Jobs Plan package that would tackle infrastructure and a host of other needs.

If hope is a silver lining, there are still dark clouds.

Eighteen states have either lifted mask-wearing rules — or never had them in the first place. Some states are reporting a spike in COVID-19 cases, with more contagious and possibly more deadly variants, that could signal a fourth wave of the coronavirus. And to date, 553,705 are known dead from COVID-19 in the United States alone.

While some of the world’s poorest nations are now getting their first shipments of vaccines, many others still have none; the world’s richer nations have been taking care of their own citizens first. But even within the United States, poorer racial and ethnic groups have been vaccinated at lower rates.

In Iowa, representatives of the state’s four dioceses conducted a conference call March 26 with the governor’s office, as both parties seek to erase inequities resulting in lower vaccination rates for immigrants, refugees, Hispanics, African Americans and other groups, such as workers in Iowa’s many meatpacking plants.

“In virtually all cases, we are talking ‘essential workers,’ many of whom, particularly at the packing plants, are at greatest risk of exposure and once exposed, passing it on to the larger community,” said Glenn Leach, a longtime volunteer in the Diocese of Davenport.

“We are concerned not only for the immigrant-refugee worker and family populations, but the folks that they see and can expose,” Leach told The Catholic Messenger, Davenport’s diocesan newspaper. He described such a scenario: “Father, mother exposed at work. Pass to children. Children go to school, play with and expose others. Parents shop, expose others.”

Economically speaking, the unemployment rate may be at 6.0%, the economy is still down 8.4 million jobs since the pandemic’s start in March 2020, said Elise Gould, a senior economist at the Economic Policy Institute. Were jobs added at the same pre-pandemic rate over the past year-plus, the U.S. is short 11 million jobs, she added.

Gould said, in an April 2 analysis of the Labor Department report, that nearly 14 million people could be added to the 9.7 million Americans officially described as unemployed if one includes people getting fewer hours and less pay due to the pandemic; those out of the workforce but not part of the count; unemployed workers who went uncounted; and those mistakenly classified as “employed, and at work.”

Still, hope is legitimate — and not false solely because it hasn’t been fully realized.

“When people are living through a period of much stress, the ability to generate hope and maintain it are one of the crucial variables, whether people can adapt to big upheavals and challenges in their life,” said Adam Brown, a faculty member of the psychology department at the New School for Social Research in New York City.

He added, “Whether we’re talking about the story of Easter, the story of Passover, especially during spring, I think there are absolutely stories — and key messages in those stories — that we can draw on to imagine that sense of hope when there is so much fear, so much darkness, so much uncertainty.”

Brown added one caveat: “I’m not a theologian.”

But Paige Hochschild is. A moral theologian, she’s chair of the theology department at Mount St. Mary’s University in Emmitsburg, Maryland.

Hope, Hochschild said, is “a great way to think about Easter.” Moreover, “maybe vaccination provides a kind of hope.”

More germane to her thinking, though, is that “part of the Catholic faith-and-reason thing is that we take the best scientific evidence that we have, admitting that it’s going to be somewhat limited, and we do things for the common good.”

Addressing the common-good component, Hochschild cautioned against a “pride that assumes that we can solve our problems rather than relying on something transcendent — failing to privilege others’ needs beyond our own.”

She said, “I think false hope assumes the answer is the end of hope or the fulfillment of hope,” adding that this takes on an attitude of “we can perfect ourselves and all our problems.”