Black Catholic administrators call out treatment of Haitians at border 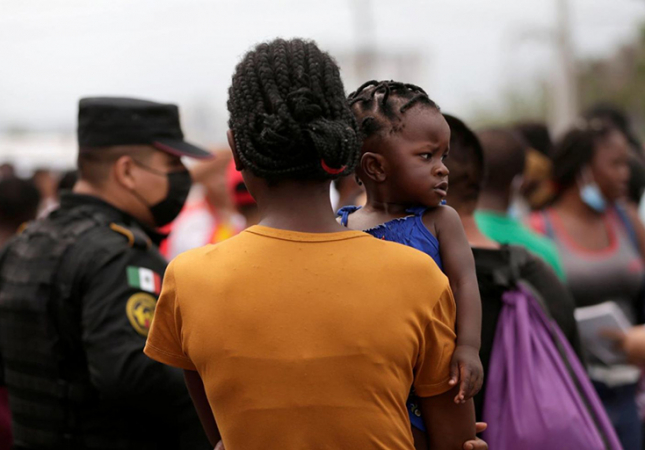 Haitian migrants seeking refuge in the U.S., are seen outside a shelter in Monterrey, Mexico, Oct. 4, 2021, as they waited to be processed by the Mexican Commission for Aid to Refugees. (CNS photo/Daniel Becerril, Reuters)

WASHINGTON (CNS) — A group of Black Catholic administrators is calling on “Catholic leaders to do something, to say something” about undertones of racism they say is playing out in the treatment of Haitians at the U.S.-Mexico border.

The National Association of Black Catholic Administrators, in a Sept. 28 news release, said the organization did not “begrudge the compassion and respect offered to our brothers and sisters from Afghanistan, Burma, Korea, Latin America, Poland, Ukraine, Vietnam,” but it was asking that Haitian migrants seeking refuge in the U.S. “be given the same level of care and respect, and an equal fight for justice.”

The group pointed to the images that played out of refugees at the border in September, when border agents on horses were filmed trying to get a group of mostly Haitian immigrants to return to the Mexico side along a river.

“The horrific photos of the United States Department of Homeland Security using horse whips on refugees is appalling,” the organization said.

U.S. Customs and Border Protection agents were using long reins to control the horses they were riding, who seemed to be spooked as the agents tried to control people running in the crowd.

The photographer who was covering the situation told a local Texas media outlet that while the photos seemed to show that agents were whipping the migrants, he and other journalists on the scene never saw any of the agents whipping anyone. Raul Ortiz, head of the Border Patrol, confirmed with CNBC that the agents were using reins to control their horses.

But video of the incident sparked outrage, particularly as one of the agents was filmed berating a man, saying, “You use your women for this? That’s why your is country is …” and seemed to use an expletive.

The Black Catholic administrators’ organization said it had “been quite difficult and gut-wrenching to watch, hear and read about how the Haitians are being treated as they attempt to enter the United States through our southern borders.”

It said a double standard has been used when it comes to Haitian immigrants and refugees, even as Haiti, too, has experienced untold natural and political disasters that have resulted in kidnappings, extreme poverty, insecurity, hunger and death for those on the island.

“The Haitian immigrants’ case begs for an urgent humanitarian response. The dignity of the human person and the quality of life for Haitians are just as important as the Afghan, Latino, and Burmese,” the organization said.

“Please do not allow yourself to be numb to the continued gross injustice and gross misuse of power,” it said. “Do not sit by and allow this gross level of racial inequality to unfold without raising one voice, one hand, one leap of faith.”

The double standards and racial injustices “have reached the point of unbearable,” the organization added.

A day later, the General Council of the Adrian Dominican Sisters issued a statement directed at President Joe Biden, calling on his administration to stop deportation flights of Haitians seeking refuge in the U.S., as well as expressing similar feelings about treatment of the migrants.

“We are deeply distressed by images and reports of the inhumane treatment of Haitians at the border,” their statement said.

It called for “a safe resumption of asylum processes; holding border agents accountable for abuses against Haitian migrants; and vigorous pursuit of Temporary Protected Status (TPS), Deferred Enforcement Departure (DED) and other remedies to protect Haitian migrants from harm as they seek refuge from environmental, political, and social strife.”

In September, an estimated 10,000 to 14,000 migrants, many of them Haitians, gathered under and around a bridge at Del Rio, Texas, close to the U.S.-Mexico border, hoping to enter the U.S. The administration was heavily criticized by pro-immigration groups after officials said the majority would be expelled.

U.S. Secretary of Homeland Security Alejandro Mayorkas later said that as many as 10,000 to 12,000 of those gathered in Del Rio were allowed to enter while awaiting hearings for asylum claims.

Mayorkas recently told USA Today that while the September surge had been a challenge, “we have developed plans that, should something like that occur again, we’re ready for it.”

Government officials in Central America have said new groups of Haitian migrants have been traveling through the area en route to the U.S.

White House Deputy Press Secretary Karine Jean-Pierre told reporters on Air Force One Oct. 5 that Haitian migrants arriving at the border will be expelled. She cited the Title 42 provision of U.S. health policy enacted during the Trump administration that turns away certain immigrants at the border as part of public health measures to contain the coronavirus.

It was activated as COVID-19 infections began to surge in the U.S. — and around the world and Biden has kept it in place at the urging of the Centers for Disease Control and Prevention.

It has been heavily criticized by pro-immigrant groups, including many Catholic organizations, as it allows Customs and Border Protection officials to expel migrants entering the U.S. illegally.

Mayorkas told USA Today, in an article published Oct. 5, that Title 42 was a public health measure, not an immigration policy.