Cardinal Bo asks prayers for peace, justice during May 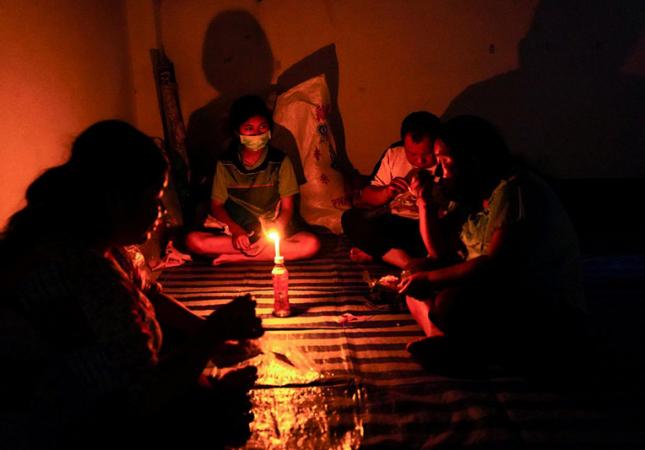 Villagers fleeing the violence in Myanmar are pictured under candlelight at a school in the Thai border village of Mae Sam Laep. Cardinal Charles Bo is asking the people of Myanmar to say the rosary and participate in eucharistic adoration for peace and justice. (CNS photo/Athit Perawongmetha, Reuters)

YANGON, Myanmar (CNS) — Cardinal Charles Bo of Yangon has encouraged Catholics to say the rosary and participate in eucharistic adoration for peace and justice in military-ruled Myanmar.

Ucanews.com reported the cardinal asked for the prayers throughout May. He outlined the intention of seeking God’s blessing for peace for the first week, justice for the second week, unity in the third week, and respect for human dignity in the fourth.

The announcement signed by Cardinal Bo said the faithful may participate at home, in parishes or at religious communities, according to their convenience.

“There is no true peace without fairness, truth, justice and solidarity,” the cardinal said in the letter, quoting the words of St. John Paul II.

Cardinal Bo’s plea for prayers comes as Myanmar has been plunged into political turmoil under the harsh rule of the military, who seized power and toppled the elected civilian government Feb. 1. Myanmar had been ruled by the military for more than 50 years before Aung San Suu Kyi’s elected government took office in April 2016.

The Southeast Asian nation has seen daily protests against military rule from urban areas to remote villages in ethnic areas.

Myanmar’s crisis has gained attention from world leaders, including Pope Francis, who has repeatedly expressed his solidarity with the people of Myanmar and urged the military leaders to turn to dialogue to pursue peace.

Catholics, who are a minority in Buddhist-majority Myanmar, have played an active role in praying for a peaceful solution, participating in pro-democracy protests and supplying material and moral support to the needy and the families of deceased protesters.

The military is continuing its intense crackdown on anti-coup protesters and bystanders with lethal force, arbitrary arrests and torture.

At least 759 people have been killed and nearly 3,500 people detained since the Feb. 1 coup, according to a rights group.

Ucanews.com reported the military also has been battling ethnic armed groups in Karen and Kachin states — both largely Christian regions — using airstrikes, heavy artillery and ground attacks that have led to thousands of people being displaced.

The airstrike in Karen April 28 forced more than 300 people to flee their villages and cross into Thailand, according to aid groups.