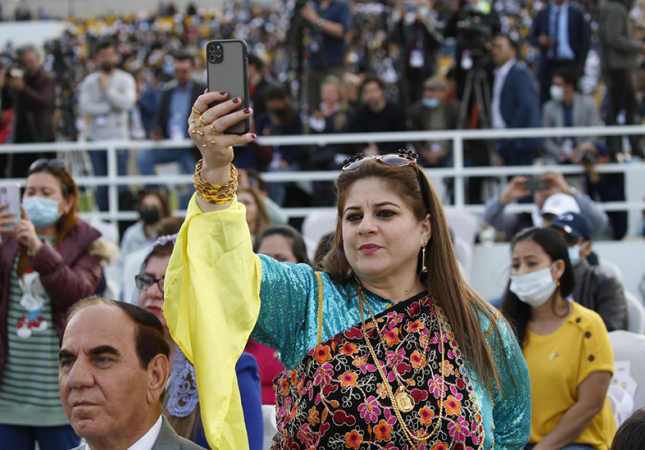 A woman takes a photo as Pope Francis celebrates Mass at Franso Hariri Stadium in Irbil, Iraq, March 7, 2021. Cardinal Louis Sako, the Baghdad-based Chaldean patriarch, offered suggestions for ways Iraqis can put into action what the pope preached while in the country in March. (CNS photo/Paul Haring)

ROME (CNS) — One month after Pope Francis’ visit to Iraq, Cardinal Louis Sako, the Baghdad-based Chaldean Catholic patriarch, called for the development of school programs to educate Iraqis about the value of diversity in their country, but he also asked for enforcement of laws protecting the religious sites of all faiths.

In a message posted on the Chaldean patriarchate’s website April 5, the cardinal also suggested a series of conferences and television programs about the diverse cultures and religions of Iraq to demonstrate how “that which unites us is much more than that which divides us” and the creation of a national center for interreligious dialogue that would “contribute to dismantling the phenomenon of fanaticism and prevent young people from adhering to it.”

Pope Francis’ visit, he said, should not be allowed to fade into people’s memories, but should lead to practical steps to help Iraqis, “with all their confessions and religions,” to “turn the page on the past and open a new page for reconciliation.”

While the Iraqi constitution establishes Islam as the country’s official religion, Cardinal Sako said, it also guarantees religious freedom and citizenship rights to members of other faith communities, although that has not always been true in practice.

“Perhaps now is the time to separate religion and the state and build a secular state,” he said, “one that is not hostile to religion, but rather respects all religions while not including religion in politics. I think this would guarantee coexistence.”

The cardinal said the four projects he proposed would promote respect for diversity while giving a push to rebuilding the country, reforming national institutions and helping the displaced return to their homes “in such a way as to allow citizens to enjoy peace and a dignified life like all human beings.”

The “human fraternity” preached by Pope Francis, based on a belief that if God is the creator and father of all, then all people are brothers and sisters, is “a key point for rejecting extremism and hatred, changing our viewpoints and thinking and building trust among us so that we can move forward as brothers and sisters with tolerance, love and respect for diversity,” Cardinal Sako wrote.

After the pope’s visit, unfortunately, some people claimed Pope Francis “called for a melding of the religions into one religion,” he said. “This is absolutely not true.”

“Fraternity does not mean dissolving all religious identities into one religion, rather it is a call for each to preserve his or her religion and convictions while learning about and respecting the religion of one’s brothers and sisters,” the cardinal said. “Fraternity and diversity will strengthen our survival and our progress, but we must live it concretely.”