Heisman winner Caleb Williams: Catholic school made me a ‘man for others’ 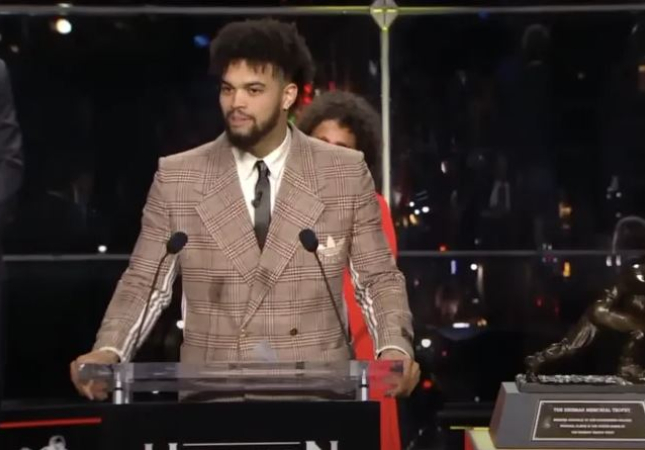 When Caleb Williams stood up to the podium accept the Heisman Trophy Saturday, the University of Southern California (USC) quarterback gave credit to his Catholic education for showing him how to be a “man for others.”

A graduate of Gonzaga College High School in Washington, D.C., Williams made clear that he has not forgotten his roots. He expressed his gratitude for his time at the Jesuit-run all-boys' Catholic school.

“The Gonzaga experience both on and off the field helped to prepare me in more ways than you can imagine,” he said.

“Coach, you may not know this, but the Gonzaga mantra that you drilled into us, ‘men for others,’ has helped inspire me to create the Caleb Cares Foundation, which is all about giving back, so thank you coach, thank you Gonzaga.”

Williams founded Caleb Cares to combat bullying. Nicknamed “Superman” because of his athletic abilities, according to the foundation’s website, Williams hopes to “inspire more superheroes to fight bullying so we can all realize that what makes us different is our superpower.”

Meanwhile, Williams’ brothers back at Gonzaga excitedly cheered him on as he accepted the famed Heisman Trophy. Online footage shows the Catholic high school students excitedly cheering, banging on drums, and chanting, “We love Caleb!”

In a statement to CNA, Gonzaga president Reverend Joseph Lingan, said, “We remain proud of Caleb’s leadership both on and off the field, his charitable nature, and his gracious and humble character … on behalf of the entire Gonzaga Community CONGRATULATIONS CALEB!”

As if to demonstrate what it means to be “a man for others,” Williams spent his speech thanking others, even recognizing his entire offensive line by name and having them stand for an ovation. “This doesn’t happen without you, thank you,” Williams stated as the crowd broke into applause.

Williams also recognized his mother and father, saying, in a heartfelt and tearful moment, “it may seem to go unnoticed and unappreciated, but you mean the world to me.”

Four years ago, while a sophomore at Gonzaga College High School, Williams made national headlines for his performance and game-winning Hail Mary in the football team’s championship game. Many have called this game “the greatest high school football game ever played.” Watch the highlights below: