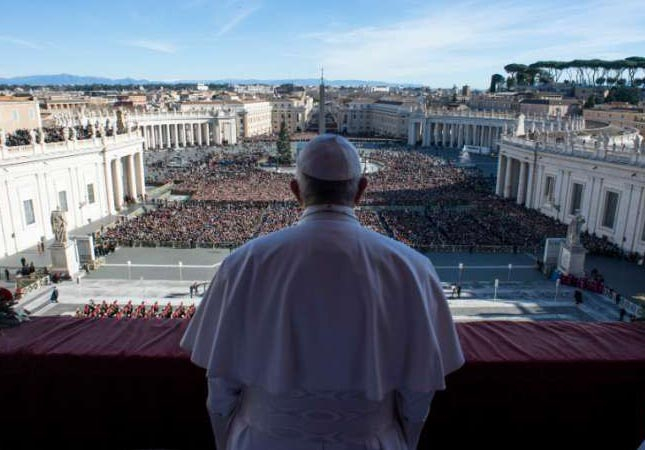 Pope Francis announced Sunday that he will give an extraordinary Urbi et Orbi blessing this week with the opportunity for Catholics to receive a plenary indulgence by tuning in via media.

“This Friday, March 27 at 6 p.m. Rome Time (1 p.m. Eastern Time), I will preside over a moment of prayer outside of St. Peter's Basilica with the square empty. As now, I invite everyone to participate spiritually through the media,” Pope Francis said March 22 in his livestreamed Angelus address.

“Urbi et Orbi” means “To the City [of Rome] and to the World.” It is a special apostolic blessing given by the pope from the balcony of St. Peter’s Basilica every year on Easter Sunday, Christmas, and other special occasions.

Read a Message from HIS HOLINESS POPE FRANCIS for LENT 2020

Pope Francis said the March 27 prayer broadcast for those suffering from the coronavirus pandemic will include listening to the Word of God and Eucharistic Adoration.

More than 300,000 people have contracted COVID-19 as of March 22, according to Johns Hopkins University Coronavirus Resource Center. The respiratory disease, which originated in Wuhan, China, has spread to 157 countries, and has led to the deaths of 13,672 people worldwide.

“We want to respond to the pandemic of the virus with the universality of prayer, compassion, tenderness. Let us stay united,” Pope Francis said.

“All those who spiritually join this moment of prayer through the media will be granted the plenary indulgence according to the conditions provided for in the recent decree of the Apostolic Penitentiary,” Holy See Press Office Director Matteo Bruni told journalists following the pope’s announcement.

The Vatican’s Apostolic Penitentiary has granted a plenary indulgence for people who pray for an end to the pandemic, healing for the sick, and the eternal repose of the dead. Plenary indulgences, which remit all temporal punishment due to sin, must be accompanied by full detachment from sin.

In this case, the person must also fulfill the ordinary conditions of an indulgence, which are sacramental confession, reception of the Eucharist, and prayer for the intentions of the pope, by having the will to satisfy the conditions as soon as possible for them.

To receive the indulgence, a person may offer at least a half hour of adoration before the Blessed Sacrament or a half hour of prayer with scripture, or the recitation of the rosary or chaplet of divine mercy “to implore from the Almighty God an end to the epidemic, relief for those who are suffering, and eternal salvation of those whom the Lord has called to himself.”

Pope Francis asked people to pray for the lonely, the elderly, doctors, nurses, healthcare workers, government authorities and the police. The pope also stressed the importance of praying for the dead during his Sunday morning Mass livestreamed from his residence in Vatican City.

“These days we are hearing the news of so many people who are dying, men and women who are dying alone without being able to say goodbye to their loved ones. Let us think about them and pray for them,” Pope Francis said.

“For families as well, who cannot accompany their loved ones on that journey, we pray in a special way for the dying and for their families,” the pope said.

What is a Plenary Indulgence