Pope Francis: The Virgin Mary teaches us ‘to live eucharistically’ 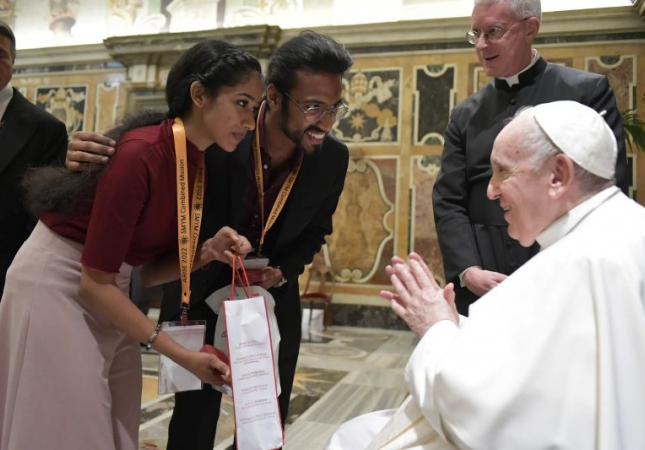 Vatican City, Jun 18, 2022 / 07:00 am (CNA) - The Blessed Virgin Mary never allowed herself to be “paralyzed by pride or fear,” but she arose and went with haste to humbly offer a helping hand, the pope told young Catholics on Saturday.

“Mary teaches us also to live eucharistically. In other words, to give thanks, to cultivate praise, and to not be fixated only on problems and difficulties,” Pope Francis said on June 18.

Pope Francis underlined that the Mother of God did not stay home and think about the great privilege she had received after her encounter with the angel at the Annunciation, nor did she fixate on the many problems it could bring.

“She was not one of those people for whom all it takes to be comfortable and secure is a good sofa: ‘couch potatoes.’ If her elderly relative needed a helping hand, she was ready to set out immediately to be there for her,” he added.

The pope spoke in an audience with young Catholics who are part of the Syro-Malabar Church, the second-biggest Eastern Catholic Church with more than four million members worldwide.

Based in India, the Syro-Malabar Church is one of the 23 autonomous Eastern Catholic Churches in full communion with Rome. It is the largest of the churches that trace their origin to St. Thomas the Apostle, who is believed to have traveled as far as southern India during his missionary journeys after his life-changing encounter with the risen Jesus.

Pope Francis told the participants in the Syro-Malabar Youth Leaders Conference that they are called to bear witness to the truth that “our lives find substance and meaning whenever we say ‘yes’ to Jesus.”

He said: “You are the young people of the Syro-Malabar diaspora. The Apostle Thomas came to the west coast of India to sow the seeds of the Gospel and the first Christian communities grew up there. According to tradition, this year marks the 1,950th anniversary of Thomas's martyrdom, which sealed his friendship with Jesus, whom he had called: ‘My Lord and my God!’”

“The Church is apostolic because she is founded on the testimony of the Apostles, and continues to grow not by proselytism, but by witness. Every baptized person shares in building up the Church to the extent that he or she is a witness. You too are called to bear witness, primarily among your peers in the Syro-Malabar diaspora, but also among those who do not belong to your communities, and even those who do not know the Lord Jesus.”

Pope Francis encouraged the young Catholics to be like Mary, who visited her older cousin Elizabeth, by visiting their elderly relatives and receiving their wisdom.

“The young mother of Jesus was very familiar with the prayers of her people, which she had learned from her parents and grandparents. There is a hidden treasure in the prayers of our elders. In the Magnificat, Mary takes up the legacy of faith passed down by her people and makes it a song of her own; at the same time, the whole Church sings that song with her,” he said.

“If you, young people, want to make your own lives a canticle of praise, a gift for all humanity, it is essential to be grounded in the tradition and prayer of past generations. This is particularly true for you; it means discovering that treasure ever anew, with the help of your bishops and priests, in the history of your Church and in its spiritual and liturgical riches.”

“Above all, I encourage you to be familiar with the word of God, to read it each day and to apply it to your life. Jesus, the risen Lord, will warm your hearts and shed light on your journey, even in life's most difficult and dark moments,” Pope Francis said.