The rhythms of Christmas and our experience of Eucharist 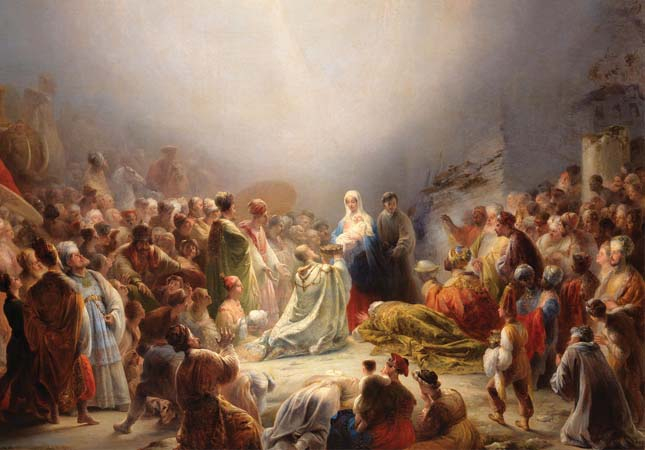 Christmas Eve in Canada, 1968. I remember sitting on the floor in our darkened living room, gazing in silence at the multi-colored lights on our Christmas tree. Our crèche was already set up at the base of the trunk, except for the statue of the Baby Jesus. We would wait until after midnight Mass to place him in the miniature manger. Then we would have a family celebration, drinking hot cocoa from Christmas mugs which were only used once a year. Fast forward to 2022 ... I still take joy in seeing my own children sip from these same festive mugs.

The Christmas season contains two “ways of being” that should permeate all our days on earth. Times to be active and celebrate, and times simply “to be” in quiet contemplation. Scripture reflects this rhythm in the accounts of Christ’s birth. We read of hosts of angels singing with joy and shepherds moving in haste to share the news of the newborn King. But we also read about the quiet solitude into which the Lord of Lords came forth into our world, being born in an out-of-the way cave. These words in the Book of Wisdom can readily apply to what happened in Bethlehem over 2,000 years ago:

For when peaceful stillness encompassed everything and the night in its swift course was half spent, Your all-powerful word from heaven’s royal throne leapt into the doomed land... (Wis 18:14-15)

It is no surprise that Christmas carols also toggle back and forth between active celebration and reflective silence. One moment we might sing “Hark! The Herald Angels Sing,” and a little later we enter into the calm stillness of “Silent Night.” The spiritual writer Adrienne Von Speyr commented in her book, The Handmaid of the Lord, that the greatest wonders of God tend to occur almost unobserved, in the holy silence of night. This was the case at Christ’s resurrection, just as it was at his birth in Bethlehem.

There are mysterious bonds that intertwine Christmas and the Eucharist. Bethlehem actually means “House of Bread,” and the place where the newborn King sleeps is called a manger, which in French means “to eat.” The two dimensions of Christmas – active celebration and quiet contemplation – come to mind when I think about the Holy Eucharist, especially as we journey through a multi-year Eucharistic Revival in the United States.

Celebration of the eucharistic liturgy

My seven-year-old daughter sometimes asks why we move so much during Mass. We stand, we sit, we kneel, we go up for Holy Communion. Some members of the congregation actively assist in various ministries. All are encouraged to join in the the hymns and responses during Mass. Because we are a composite of soul and body, the Church sees the importance of worshiping both interiorly and exteriorly.

But along with all the active dimensions of the celebration of the Mass, Vatican II also reminds us of the need for prayerful quiet as well. For example, it is awe-inspiring to experience the sacred hush immediately after Holy Communion when the faithful quietly adore the Lord who is corporally dwelling within them – the same Lord “through whom all things were made,” as we profess in the Creed.

Adoration of Jesus in the Blessed Sacrament outside of Mass

The adoration of the three wise men is a favorite subject of artists. Like the three magi adoring the Lord Jesus, we also have opportunities to quietly adore Jesus in the Blessed Sacrament outside of Mass. In our diocese, there is now a “Find Eucharistic Adoration” webpage available at Saginaw.org under the heading “Eucharistic Revival.”

In adoration of Jesus in the Eucharist outside of Mass,  we can pray before a tabernacle where Jesus, disguised as bread in the consecrated Host, waits for us to visit him. Or it can mean that we come for special times of adoration in a church or chapel when the Host is exhibited in a special metal holder called a monstrance or in a metal container called a ciborium.

Why does the practice of eucharistic adoration outside  of Mass exist? Imagine that a local news outlet reported this breaking story: Jesus himself was really present in a church not far from your home! Many people would enthusiastically flock to be in his true presence. Christians, in particular, would not want to miss the chance to be in the presence of the Savior. Eucharistic adoration is so powerful precisely because it allows us to be in the presence of the One whose presence we hope to enjoy for all eternity.

The both/and of eucharistic spirituality

The Catholic Faith is remarkable for how often it embraces the “both/and” in its teachings. The Church holds that Jesus Christ is both true God and true man, for example. She also teaches that the Mass and adoration outside of Mass are both precious gifts. In fact, there is a long list of intellectual and spiritual giants who made these two gifts a key part of their spirituality: St. Thomas Aquinas; St. John Henry Newman; St. Teresa Benedicta of the Cross (a.k.a. Edith Stein), a leading Catholic intellectual of the 20th century; St. John Paul II; Servant of God Dorothy Day; and G.K. Chesterton, to name a few. The Church’s teaching is clear: Mass and adoration of the eucharistic Lord outside of Mass are meant to be complementary. Eucharistic adoration necessarily flows from the Mass, and it should in turn help us to experience Jesus and the Mass in a more profound manner.

Pope Benedict XVI has reflected on how, “During the early phases of the reform [after Vatican II], the inherent relationship between Mass and adoration of the Blessed Sacrament was not always perceived with sufficient clarity. For example, an objection that was widespread at the time argued that the eucharistic bread was given to us not to be looked at, but to be eaten. In the light of the Church's experience of prayer, however, this was seen to be a false dichotomy. ... In the Eucharist, the Son of God comes to meet us and desires to become one with us; eucharistic adoration is simply the natural consequence of the eucharistic celebration, which is itself the Church's supreme act of adoration. Receiving the Eucharist means adoring him whom we receive. Only in this way do we become one with him, and are given, as it were, a foretaste of the beauty of the heavenly liturgy. The act of adoration outside Mass prolongs and intensifies all that takes place during the liturgical celebration itself. Indeed, ‘only in adoration can a profound and genuine reception mature. And it is precisely this personal encounter with the Lord that then strengthens the social mission contained in the Eucharist, which seeks to break down not only the walls that separate the Lord and ourselves, but also and especially the walls that separate us from one another’” (Sacramentum Caritatis, 66).

The refrain of a classic Christmas carol includes the words, “O come let us adore him.” Being able to enjoy Christ’s real presence – to adore him both in the celebration of Mass and in the silence of eucharistic adoration outside of Mass – is a grace for which we should be supremely grateful. In looking at the rhythms of Christmas and the rhythms of the Church’s eucharistic life, I am reminded of the winsome words I once saw on a holiday plaque: “The magic of Christmas is not in the presents, but in HIS presence.”