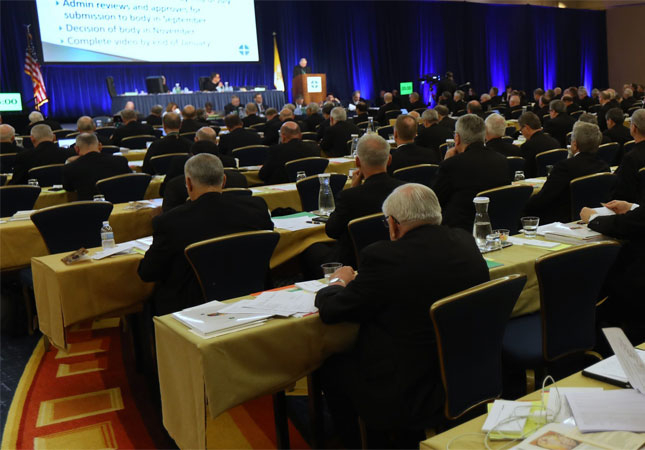 The body of bishops meets typically twice a year for a General Assembly to transact its business and address matters of concern within its civil and canonical mandates. The assembly is conducted in public, but attendance is limited to individuals and organizations who work in conjunction with USCCB or the member bishops.  The proceedings are made available online via live stream.

Decisions ranging from election of Committee Chairmen and Conference Officers to subject matter of pastoral statements and revisions to liturgical books, require either a simple majority, or a vote of two-thirds of the member bishops in order to be approved. Active bishops, ordinary and auxiliary, both Latin and Eastern Rite are eligible to vote on particular items. Emeritus bishops are welcome to attend the Assemblies and participate in discussion and other activities, but they are not eligible to vote.

The bishops also use the time of the General Assembly to meet with the other bishops of their region to discuss items on a smaller scale or more specific to their individual dioceses.

Further, the General Assemblies are a time of fraternal connection and fellowship among the bishops.  They pray and worship together throughout the Assembly in addition to conducting the ongoing business of the Conference.

The meeting agenda includes discussion and votes on a number of items including: the Eucharistic revival initiative and approval of a national Eucharistic Congress in 2024; an update of the “Socially Responsible Investment Guidelines”; a statement on the Eucharist, The Mystery of the Eucharist in the Life of the Church; the proposal to add Saint Teresa of Calcutta on the Proper Calendar for the Dioceses of the United States as an optional memorial on September 5; the Resolution on Diocesan Financial Reporting; new English and Spanish versions of the Order of Christian Initiation of Adults; a translation of Holy Communion and Worship of the Eucharistic Mystery Outside Mass; “National Statutes for the Catechumenate” in English and Spanish; and the USCCB’s 2022 budget.

During the assembly, the bishops will vote for a treasurer-elect for the Conference, as well as chairmen-elect of five Conference committees: Clergy, Consecrated Life, and Vocations; Divine Worship; Domestic Justice and Human Development; Laity, Marriage, Family Life, and Youth; and Migration. The bishops elected will serve for one year as treasurer-elect or chairman-elect before beginning a three-year term at the conclusion of the 2022 Fall General Assembly. There will also be votes for the election of board members for Catholic Relief Services (CRS) and for the election of a new USCCB general secretary.

Also at the meeting will be a consultation of the bishops on causes of beatification and canonization for Servant of God Charlene Marie Richard, Servant of God Auguste Robert Pelafigue, and Servant of God Joseph Dutton. Other items that will be presented and discussed include: the 2021-2023 Synod of Bishops; the work of Catholic Relief Services, Catholic Charities USA, and Catholic Legal Immigration Network (CLINIC); the 50th anniversary of the Catholic Campaign for Human Development; the Journeying Together intercultural dialogue and encounter process; the application and implementation of the Pastoral Framework for Marriage and Family Life Ministry in the United States; the “Walking with Moms in Need” initiative.