"Believe it or not!" for Catholics 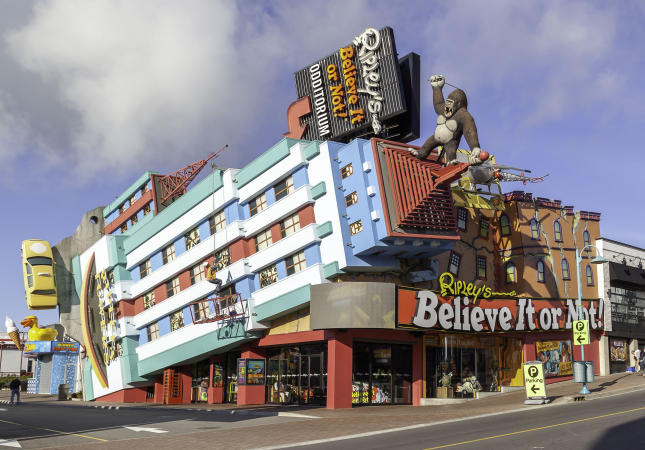 By: Dr. Dan Osborn, Office of Formation and Office of the Permanent Diaconate for the Diocese of Saginaw

I grew up near Niagara Falls. As a little child, I was especially fascinated by a tourist attraction that had popped up on the Canadian side of the Falls: “Ripley’s Believe It or Not!” These days, I would consider this museum to be quite tacky, but the King Kong statue on top of the building was awfully exciting for a young boy to gaze up at. I remember that, as I toured the museum, my mind was filled with questions such as “Is this true?” and “Is this real?” In the spirit of “Ripley’s Believe It or Not,” then, here are seven Catholic truths that some might find surprising...

Jesus is not a human person.

This may sound odd to modern ears, but the teaching of the Church is that Christ is only a divine person (the second person of the Holy Trinity, the eternal Son of the Father). The good news for us is that this divine person took on a human nature when he was conceived in the womb of the Virgin Mary (the history-changing event we call the Incarnation). That is, he took on a human body and a human soul (with a human intellect and a human will). But the Son did not take on human personhood. (Jesus does not suffer from multiple personality disorder!)

There is only one person in Christ – the divine Son. So when Jesus weeps at the tomb of Lazarus, it is in
a very real sense God weeping. When he experiences thirst when talking to the woman at the well, it is God thirsting. And when Jesus dies on the Cross to save us, it is the second person of the Trinity experiencing death in his human nature. The divinity of Christ’s personhood is at the heart of the amazing love story that Christians have the privilege of being part of thanks to our baptisms.

Divorced Catholics are not automatically prevented from receiving Holy Communion.

Some Catholics experience the heartbreak of seeing their marriages end in civil divorce, sometimes through no fault of their own. Sadly, many civilly divorced Catholics are under the impression that they should therefore not receive Holy Communion. But the Church actually teaches that, unless the divorced Catholic is aware of being in a state of grave (mortal) sin, she or he is just as free to receive Holy Communion as any other Catholic. It is when a divorced Catholic attempts a civil second marriage without a decree of nullity that a prohibition against receiving Holy Communion would normally come into play. (Note: Pope Francis recently opened up a conversation about this second scenario in a footnote within his letter on marriage, Amoris Laetitia.)

Bishops, priests and deacons are not the ministers of the sacrament of Holy Matrimony.

In the Latin rite of the Catholic Church, the man and the woman getting married are the ministers of the sacrament of Holy Matrimony, not the bishop, priest or deacon who is presiding at their wedding.

The Catholic Church is not a religion of guilt.

The stereotype that Catholicism centers on guilt is often repeated in films and television shows. But as any faithful Catholic knows, the very opposite is true. Our religion is about liberation from guilt and shame, thanks to the saving love of Jesus Christ. The sweet words of absolution that we hear from a bishop or priest in Confession show that we are actually a religion of true freedom: “God, the Father of mercies, through the death and resurrection of his Son has reconciled the world to himself and sent the Holy Spirit among us for the forgiveness of sins; through the ministry of the Church, may God give you pardon and peace, and I absolve you from your sins in the name of the Father, and of the Son, and of the Holy Spirit.”

The Catholic Church is radically sex-positive.

The Catholic Church does not just teach that sex is good. The Church teaches that this gift from God is so good, it is holy. The reason the Church gets characterized as being “anti-sex,” of course, is that the Church accepts the game plan for human sexuality that God has revealed, namely, that sexual activity is reserved to married couples (a husband and wife). St. John Paul II made a groundbreaking contribution to the Church’s appreciation of human sexuality in his “theology of the body.” I encourage you to Google “Theology of the Body Institute” to learn more about this saint’s life-changing insights on sex, gender and the human person.

Faith and science are meant to be friends, not enemies.

Many view science as the enemy of the Catholic faith but, in reality, modern empirical science can legitimately be viewed as a fruit of the Catholic culture from which it sprang. Regarding the relationship between faith and science, Vatican I teaches that “although faith is above reason, nevertheless, between faith and reason no true dissension can ever exist, since the same God, who reveals mysteries and infuses faith, has bestowed on the human soul the light of reason.” History is filled with great Catholic scientists like Father Georges Lemaître,a Jesuit priest and father of the big bang theory.

Modern science can sometimes even point to the miraculous. I find one scientific study to be especially significant for our times. Fifty years ago, Dr. Edoardo Linoli (a professor of anatomy, pathological histology, chemistry and clinical microscopy) was given permission to analyze the relics of a Eucharistic miracle in Lanciano, Italy. The relics are from the eighth century, when a monk who had doubts about the real presence of Christ in the Eucharist was offering Mass. When he prayed the words of consecration (“this is my body” and “this is my blood”), the bread changed visibly into flesh and the wine changed visibly into blood. Dr. Linoli presented his findings on March 4, 1971. According to a 2005 ZENIT article: “His analysis revealed no traces of preservatives in the elements, meaning that the blood could not have been extracted from a corpse, because it would have been rapidly altered.” The scientist concluded that “the flesh and blood were of human origin.” The blood was of type AB and the flesh was cardiac tissue. (Recall our traditional devotion to the Sacred Heart of Jesus!)

God does not do magic tricks. When he performs a miracle, it is meant to help our faith. According to a 2019 Pew Research study, only one-third of U.S. Catholics agree with the Church’s teaching that the Eucharist is truly the body, blood, soul and divinity of Jesus Christ. Scientific testing such as that carried out by Dr. Linoli can actually point us to the truth of the Catholic doctrine that when Jesus commanded his followers to eat his body and drink his blood in John 6, he was not speaking in symbols. Rather, our Catholic faith holds that even though he is “disguised” as bread and wine in the Eucharist, it is truly the resurrected Lord! And in this Easter season, we should all exclaim “Alleluia!” and rejoice in the Holy Eucharist – the sublime gift born from the loving heart of Jesus.