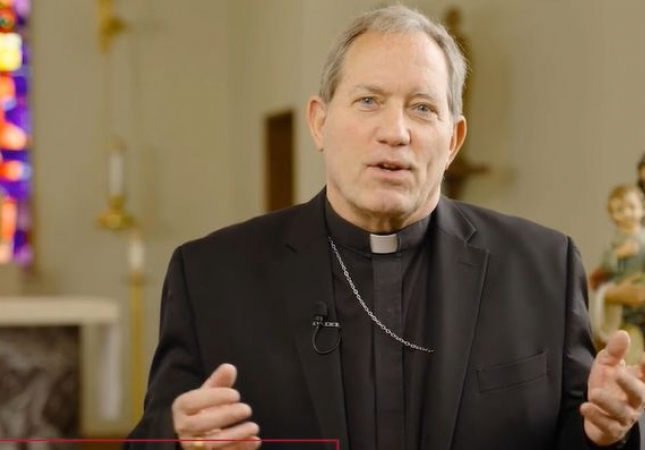 For this sixth week of Lent, we continue to look at the titles given to him in the Litany of St. Joseph. Today we want to reflect upon Joseph Terror of Demons.

One may wonder why I chose this title for St. Joseph for our reflection.

We live in a world that is filled with disorder, disunity, division, outright evil, sin…and grave sin, in fact.  One may think that it is just a part of fallen human nature; and it is. But it is much more than this.

It is, in my opinion, the result of the work of the Evil One in our world."

The violence and the division, the chaos and disunity in our society right now is the result of the work of the Evil One in people’s lives.  It doesn’t mean that people are evil – they are created in God’s image and likeness. But their thoughts, words and actions may easily be under the influence or the temptation of the Evil One.

After all, Satan also has many titles –  the Great Deceiver, the Price of Darkness, the Father of Lies, the Great Tempter, the God of this Age, the Adversary, to name a few.

And we know that since the fall of Adam and Eve, Satan has been an active force in the world. In the words of St. Peter, “Stay sober and alert, your opponent the devil is prowling like a roaring lion, looking for someone to devour. Resist him, solid in your faith.”   This is a reminder that like Jesus who was tempted for 40 days in the desert, we too, are not exempt from the same temptations. The Evil One is alive and well in our culture today.

One may also wonder why St. Joseph would be given such a title – Terror of Demons. A little history –

In the late 1930’s, Pope Pius XI began to see the serious threat that communism posed to the common good and called upon St. Joseph to protect the Church from the errors of communism. As a result, Catholics fervently began to pray to St. Joseph, specifically under the title “Terror of Demons” to combat the atheism and the atheistic ideas of communism.

St. Joseph’s most singular mission entrusted to him by God was the caring for and protecting of the Holy Family. Joseph was endowed with graces enough to strike fear into the forces of darkness. The demons don't stand a chance against St. Joseph.  Saint Faustina writes: “Saint Joseph urged me to have a constant devotion to him. ... He has promised me this special help and protection (1203).”

Invoking the name of St. Joseph

A chapter in the Consecration to St. Joseph by Fr. Calloway, specifically addresses Joseph as the Terror of Demons.  Joseph’s intercession against demons is not well-documented, but has largely been proven by experience. In the work of exorcists, invoking the name of St. Joseph has brought frantic responses from the demon in the afflicted person.

Fr. Calloway writes: “After the Virgin Mary, demons fear St. Joseph more than any other saint.”   Blessed Bartolo Longo, a former satanic priest before his conversion, said: “It is a great blessing for souls to be under the protection of the saint [Joseph] whose name makes demons tremble and flee.”

Two wonders of St. Joseph I would like to emphasize are: the fatherhood of Joseph and the purity of St. Joseph.

Today the Lord wants to make St. Joseph’s fatherhood known and replicated throughout the world. This terrifies Satan. The Evil One knows what the intercession of St. Joseph is capable of doing. The more men begin to resemble St. Joseph, the more the kingdom of Satan will be destroyed.

The purity of St. Joseph is also a weapon against the filth and perversions of the devil. Purity repulses the devil. In an overly sexualized society where there is a multi-billion dollar pornographic industry, the spiritual plague of impurity is destroying the hearts and minds of men, women and children daily.

An impure heart blinds a person to the ever presence of God. If a person wants to see God and have power over darkness, they must strive to live chaste and pure, modeling their lives after St. Joseph.  St. Joseph sees the face of God and has power over evil because he is pure.

In this season of conversion, St. Joseph wants to teach the power of fatherhood to all men and the beauty of purity to all who struggle with this and seek his intercession.

In the words of Padre Pio, “Go to Joseph with extreme confidence, because I do not remember having asked anything from St. Joseph, without having obtained it readily.”

St. Joseph, Terror of Demons, pray for us!