Bishop Gruss Takes Us On A Lenten Journey With St. Joseph; The Video Series Begins Today 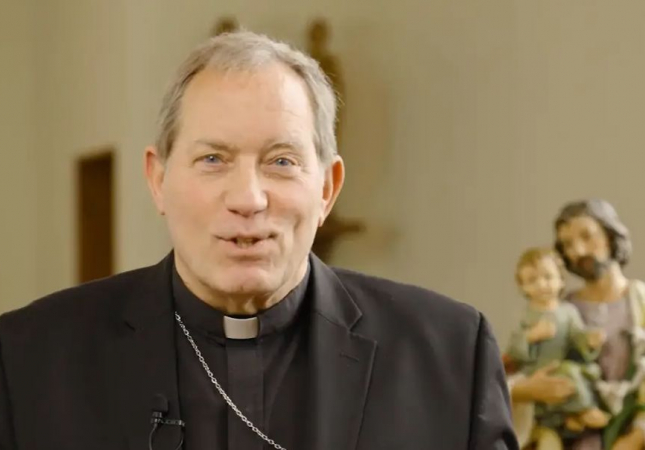 Greetings and blessings to all of you! Thank you for joining me on this Lenten journey with St. Joseph. In the Litany of St. Joseph, one of the titles given him is Joseph Most Obedient.

Perhaps some people would not look at obedience as a virtue but as something negative, maybe even a vice.

The secular world prizes individual freedom above all else. Therefore, in a society that preaches independence, obedience is often seen as that which imposes or places limits on freedom, that in some way it requires handing over our rights to someone else, to another.

Kids might see obedience in the sense that if they do not submit to authority, their parents, then they will get punished. Obedience then is seen as a deterrent rather than a virtue. So what is a virtue?

The best version of ourselves

Saint Thomas Aquinas, one of the great theologians of our Catholic tradition, gives us perhaps the most comprehensive explanation concerning obedience.

And from his teaching, it is clear that obedience is indeed a special virtue. It is under obedience that we may perform great acts of heroism. One example – a soldier who remains at his post under strict military obedience – when to do so means possible imminent death – may demonstrate bravery in a way he would not have if not for his obedience to his commander, the one in charge of him. That being said, St. Thomas also explains that God must be obeyed in all things. Not out of fear of punishment, but out of love and trust.

St. Joseph is a model of obedience for us. His deep love for God and his faithful trust is what allowed him to respond to the will of God in his life. We know God to be the author of all life. And therefore seeking and doing his will is paramount in living the virtue of obedience.

How could Joseph respond to the Angel saying to him, “Have no fear about taking Mary to be your wife” without having a deep faith and trust? As soon as Joseph knew God’s will for him, he obeyed. Even though Mary was almost 9 months pregnant, Joseph had to believe it was God’s will for them to leave Nazareth and go down to Bethlehem. Obviously this was to fulfill the prophecy of Micah that the Savior would be born in Bethlehem. But still, in the end, Joseph had to abandon himself to the will of God. He had to practice the virtue of obedience.

Here is another example in Joseph’s life. When the angel told him that Herod was planning to destroy the child and that he should flee to Egypt, Joseph immediately got up and began the journey. Whenever he was warned in a dream, he always obeyed the will of God. He never questioned Divine Providence. Again, he practiced the virtue of obedience.

Joseph and Mary always trusted God in living this obedience, even if it meant suffering. They were certain that God had their best interests in mind.

What about us? Have you every prayed for guidance in a decision, and then felt in your heart of hearts that what came to you was truly God’s will? But it was not what you really wanted to hear? This was the case for me many years ago in discerning a call to become part of the faculty at the North American College in Rome. Though I had no interest in this position, my bishop asked me to pray about it. So I did.  One act of obedience.

The Lord had my best interest in mind

The discernment or the answer was clear to me, and I believe that it was God’s will that I go.  But I did not like the answer. It would dramatically change my priestly ministry.  In the end, I had to practice the virtue of obedience, and trust that the Lord had my best interest in mind. So I said yes, knowing this was God’s will for my life. I believe that assignment had an impact on my future as well…in becoming a bishop.

If we are always seeking the will of God for our lives, there may be times when the Lord will ask things of us that we don’t want for ourselves or the cost may seem too great, or we can’t see the end result, and we are therefore reluctant to say “yes.”

Christ was obedient to death

The season of Lent is about conversion to what the Lord wants for our lives. In praying to God, let us seek transformation from our resistance to obedience. Christ was obedient to death, death on the Cross (cf. Phil 2:8). He was obedient to His parents (cf. Lk 2:51) and advises us to be obedient as well: to Him, to His commandments, and to the truth.

If asked, St. Joseph will increase the virtue of obedience in each of us. He will assist us to discerning the will of God for our lives, so that like him, we too may respond with great love and trust in the God who loves us.

God bless you all.