Christian community 'Thanks God ahead of time," as they gather from near and far to pray for defeat of Proposal 3 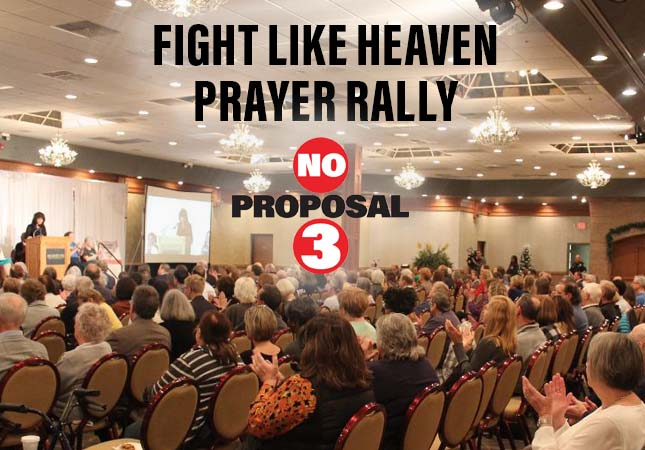 SAGINAW- On Sunday, Nov. 6, members of the Christian community gathered in Saginaw to pray for the defeat of Proposal 3, which would enshrine abortion on demand up through childbirth into the state’s constitution.

Speakers traveled from near and far to participate in the Ecumenical Fight Like Heaven Prayer Rally, where they gave inspiring testimonies, shared encouraged words and prayed for the proposal's defeat.

In her opening remarks, event emcee, Katie O'Mara, challenged those present to continue to pray without ceasing through Election Day. She also borrowed some advice from a Michigan priest on the path to sainthood.

"I am sure some of you have heard of Father Solanus Casey," she said. "He used to be a priest in the Detroit area and he's on his way to sainthood, right now. One thing that Father Casey always said was to 'Thank God ahead of time.' So, right now Lord, we thank you. We thank you for hearing our prayer and defeating Proposal 3. We are thanking you ahead of time and we are giving God the glory for this."

A number of testimonies that followed pointed to the inspiration received in the work to advocate for women and children and reveal the hidden dangers of Proposal 3.

"I thought the gathering was powerful, not only in the passion of the speeches, but in the amount of prayer from all the people attending in support of life," said Megan Roessner, who belongs to Holy Family Parish in Saginaw. "It made me feel hopeful that life will win and that Proposal 3 has a large chance of being shut down. The people who attended the rally stood out to me more than anything. Everyone was so kind, caring, and filled with a love for life and a love for Jesus. It was so beautiful and I am thankful I was able to be a part of it."

"It was so inspiring to be among so many people who value the lives of the unborn, who stand up for the safety of our most precious Michigan children and who are willing to be a voice for those who have no voice," said Missy Davert of St. Catherine of Siena Parish in Bay City. "I pray that enough people will rise up and vote "NO" on this terrible proposal."

Full Video of the Rally