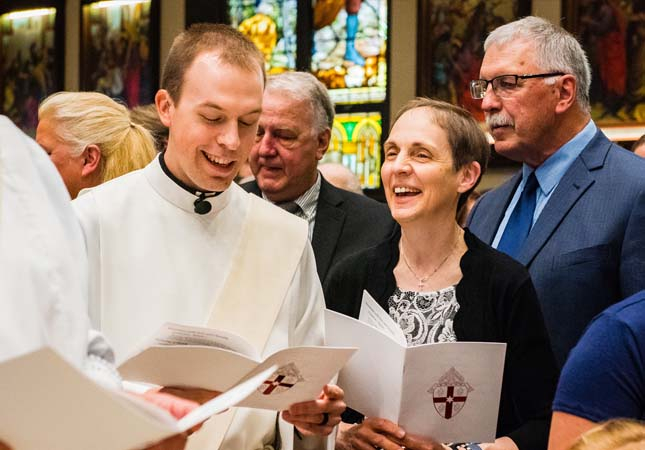 HOW TO WATCH ON EWTN ON FRIDAY, APRIL 10

Maribeth Hopps heard the Lord telling her, “You did this once … you’ve got to do it for this.”

It was a nudge, she believes, from the Holy Spirit to compose a Stations of the Cross prayer for the current coronavirus situation.

With anxieties and dramatic changes facing people locally and around the globe each day, the mother of recently ordained diocesan priest, Father Marc Hopps, began to write a new set of stations.

Connecting the Passion with the Pandemic

Using a Stations of the Cross she and a friend had previously written as a template, Maribeth composed a set of prayers drawing connections between Christ’s Passion and the pandemic. For example, during the fifth station, “Simon helps carry the cross,” the prayer asks for guidance for the government leaders and medical teams seeking to contain and cure the virus.

Guidance from the Holy Spirit

“I prayed to the Holy Spirit for guidance before and during writing and gave thanks when it was completed,” Maribeth said. “It was pretty amazing, because I had a whole different viewpoint of the stations from the idea of this pandemic... it was just like a prayer … I absolutely don’t take  any credit for it… I just felt that God wanted it.”

She said she wrote it intending to share with a few friends and colleagues, as well as the Praying Our Faith ministry, a ministry for and with adults and teens with developmental disabilities, which Maribeth helps lead.

Tears in the Adoration Chapel

Sunday night, Maribeth sent a copy to her pastor, Father José María Cabrera, pastor of All Saints Parish in Bay City, Mich. When he realized she had prayerfully written the Stations of the Cross, he decided to pray them at the Adoration Chapel.

“When I finished praying the stations, I was in tears,” he said. “I thought, ‘this is going to bring so much healing, consolation and hope to so many people.’”

Father José worked with Maribeth to format and edit the stations before putting a PDF on the parish website. On Tuesday, since the parish’s usual Lenten activities were canceled, Father José decided to livestream the Stations of the Cross prayer that Maribeth had written.

About 50 people watched during the livestream, Father José said.

And then they began sharing. And commenting. Within 24 hours, more than 800 people had viewed the video.

One of the people whom the stations were shared with was Bishop Robert Gruss, Bishop of the Diocese of Saginaw. He was preparing to record a more traditional version of the Stations of the Cross for television when he read what Maribeth had written.

“They’re beautiful,” Bishop Gruss said. “They powerfully speak to the heart of what we are experiencing at this moment in salvation history and remind us that Jesus is always by our side walking with us. We are not alone.”

Bishop Gruss has encouraged the faithful to “intensify” their prayer during this time of crisis.

'Jesus is in Control of the Storm'

Father José agrees. From our prayers, he said, great blessings will come. “Christianity is a religion of hope. And so even though we are going through this crisis, we know that … Jesus is in control of the storm. And so these stations are a reminder for us that Jesus is still on the throne.”

Father José explained that the faithful can still be united with God through spiritual communion, as Bishop Gruss has taught, and other sacramentals and devotions, such as the Stations of the Cross.

Finding hope and unity in the storm

“Knowing that someone from our diocese has been able to pray through the storm should give us comfort through the uncomfortable times,” he said.

Maribeth said that while she never expected the prayer she wrote to be shared with a wider audience, she hopes it will “quell anxiety and unite us in prayer.”

“It’s all about praising God, even through this virus … giving God the glory because we know we’ll see the other side,” she said.

Recorded for the Faithful

DOWNLOAD THIS GUIDE SO THAT YOU CAN PRAY ALONG