Not a walk in the park: Synod journey requires listening, patience 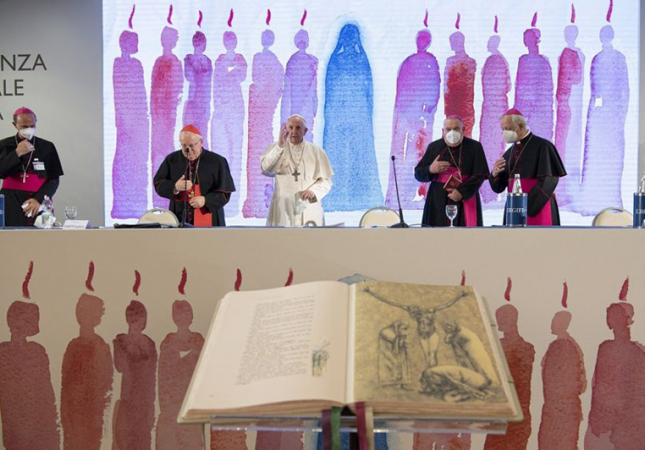 Pope Francis delivers his blessing as he opens the general assembly of the Italian bishops' conference in Rome May 24, 2021. In remarks to the bishops, Pope Francis said that an upcoming Synod of Bishops for the universal church "must begin from the bottom up." (CNS photo/Vatican Media)

VATICAN CITY (CNS) — “Today some think synodality is holding hands and going for a walk, having a party with young people or surveying opinions (like), ‘What do you think about women priests?'” Pope Francis told members of the International Theological Commission in 2019.

In his continuing efforts to promote a synodal process that involves the whole church and focuses on listening to one another and to the inspiration of the Holy Spirit, Pope Francis in May approved major revisions to how the Synod of Bishops will work, starting with a full diocesan-level process of consultation.

“The synod must begin from the bottom up,” he told Italian bishops May 24, just three days after details of the new process were announced.

“This will require patience, work, allowing people to talk so that the wisdom of the people of God will come forth because a synod is nothing other than making explicit what ‘Lumen Gentium’ said: The whole people of God — all of them, from the bishop on down — is infallible in belief,” the pope said. “They cannot err when there is harmony among all.”

But the process of listening and consultation also may require some management of expectations or fears: explaining to people who want immediate, radical change that discernment takes time and requires fidelity to God’s will; and explaining to those scandalized by the questions that perhaps there are better ways to explain church teaching and live the Gospel.

Pope Francis frequently repeats that a synod is not a parliament, but a process of discernment.

St. Paul VI, who revived the Synod of Bishops for the universal Catholic Church, felt it necessary to make the same point.

On the eve of the opening of the third general assembly of the synod in 1974, the pope said the process involves “questioning the signs of the times, and even more trying to interpret the divine plan in depth” by bringing together the world’s bishops for a “common study of the conditions of the church and by seeking agreed solutions to questions pertaining to her mission.”

“It is not a council; it is not a parliament; it is a synod with a special nature,” he added during his Angelus address.

Over the past five decades, that special nature has increasingly involved wider consultation with laypeople, religious and priests before bishops are elected or appointed to attend the synod assembly.

Given Pope Francis’ emphasis on imbuing the church with a synodal spirit, the International Theological Commission in 2018 published a document, “Synodality in the Life and Mission of the Church.”

Synodality, the document said, promotes the baptismal dignity and call of all Catholics, values the presence of different gifts given by the Holy Spirit and recognizes the specific ministry entrusted to pastors and bishops in communion with the pope for the preservation of the faith and the renewal of the church.

But putting all of that together can be tricky, especially making sure that laypeople feel heard, but also accepting the role of bishops and the pope in discerning what to do. And making sure bishops exercise their ministry only after hearing what their people have to say.

For Pope Francis, it is not just a matter of process, but a requirement of taking seriously the truth of the church — as St. Ignatius of Loyola said, and the pope often repeats — being both “our hierarchical holy Mother Church” and also “the holy, faithful people of God.”

In his 2018 document on the synods, Pope Francis said, “the bishop is both teacher and disciple. He is a teacher when, endowed with the special assistance of the Holy Spirit, he proclaims to the faithful the word of truth in the name of Christ, head and shepherd. But he is a disciple when, knowing that the Spirit has been bestowed upon every baptized person, he listens to the voice of Christ speaking through the entire people of God.”

While people may look at the 2014 and 2015 assemblies of the Synod of Bishops on the family or the 2019 synod for the Amazon as occasions where the voice of the laity calling for bold change was ignored, bishops at the gatherings really wrestled with the issues and the best ways to respond.

Closing the synod assembly in October 2015, Pope Francis said the discussions showed “the vitality of the Catholic Church, which is not afraid to stir dulled consciences or to soil her hands with lively and frank discussions.”

The input and discussions also are designed to serve Pope Francis’ goal of helping every Catholic understand that she or he has a role to play in the church and in its mission in the world.

After some 300 young adults gathered in Rome in March 2018 for reflection and discussion ahead of the Synod of Bishops on young people, they issued a final statement that included the note: “We have been thrilled to be taken seriously by the hierarchy of the church and we feel that this dialogue between the young and the old church is a vital and fruitful listening process. It would be a shame if this dialogue were not given the opportunity to continue and grow! This culture of openness is extremely healthy for us.”