The only 24/7 Adoration Chapel in the Diocese 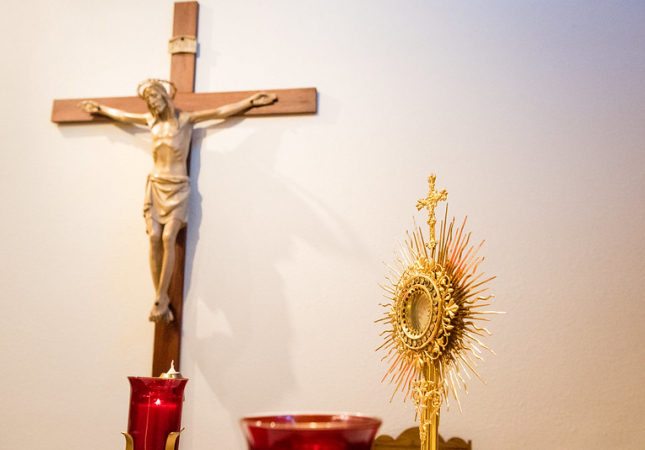 Over the past almost 35 years, the Adoration Chapel in Bay City has been a sacred space, a place of calm and quiet in the midst of a chaotic world. There, the faithful approach Jesus, hidden in the Blessed Sacrament. Atop the altar, a golden monstrance holds a small consecrated Host in which Jesus is truly present, waiting for us to visit him.

Find Eucharistic Adoration near you.

Eucharistic adoration outside of Mass is the devotion of praying before Jesus in the Blessed Sacrament, whether near a tabernacle containing consecrated Hosts from a previous Mass or before a Host displayed in a monstrance. A monstrance is a special vessel used for this purpose. This time of prayer may be a full hour, called a “holy hour,” or it can be a few minutes.

While many parishes throughout the Diocese of Saginaw offer times for exposition of the Blessed Sacrament outside of Mass, and some churches are open for people to pray before the tabernacle, there is also a special Adoration Chapel in Bay City, which is open 24/7. The Adoration Chapel began in August 1987 at St. Joseph Church in Bay City and moved to All Saints Parish, St. James Church in July 2018.

The opportunity to spend time with Jesus “face-to-face” (under the appearance of bread in the Host) is what makes eucharistic adoration special, said Father José María Cabrera, pastor of All Saints Parish.

“We are so overwhelmed with information and devices, the chapel provides an oasis of quiet to sit in (Jesus’) presence,” he said. Father José has witnessed a great diversity of individuals coming to visit Jesus.

“I have seen people praying the Stations of the Cross or their rosaries, doing spiritual reading or speaking directly to Jesus in the Host exposed in the monstrance. I have seen people very much at peace. I have seen people in great sadness and pouring their tears before Jesus,” he said. “I even saw a lady bringing her own vacuum and duster and cleaning ‘Jesus’ home’ at 1 a.m. I had a big smile when I saw that— so beautiful.”

Since the Adoration Chapel is open around the clock, the faithful can approach Jesus even at times when churches are closed. Father José recalled one instance when a family came there around 10 p.m. after learning a loved one had died by suicide.

The Adoration Chapel, like Mass, is one of the few places the faithful can encounter Jesus in the Host. Still, this private devotion is distinct from the Holy Sacrifice of the Mass itself, when Catholics receive the Body, Blood, Soul and Divinity of Jesus in Holy Communion.

“Exposition of the Blessed Sacrament comes from the Mass and leads to the Mass,” said Father José. “The highest form of adoration is the Mass itself. Adoration is an extension of the Mass.”

He added that eucharistic adoration flows from the Catholic belief that the Real Presence of Jesus in the Host remains beyond the Mass itself. All are welcome to come and pray during exposition of the Blessed Sacrament at parishes throughout the Diocese or visit the Adoration Chapel in Bay City.

“The chapel is a refuge.”

When Patrick McFarland looks back at his faith journey, he can see clearly when there was “a complete turnaround.” It was when he began stopping by the Adoration Chapel at St. Joseph Church, Bay City, nearly two decades ago ... for peaceful, quiet prayer time.

“I was sitting with (my brother recently) and he said, ‘you know, you’ve changed in these last 10 years or so— a dramatic change in your life.’ He says, ‘I think the Holy Spirit’s sitting on your shoulder.’ I told him that any changes probably are from visitations to the Blessed Sacrament,” Patrick said.

What began as infrequent, brief visits during his lunch break grew to regular holy hours.

“The immediate feeling is your blood pressure goes down, your head clears, and you start to just communicate silently. … But as you begin to try to reform your life, things change,” he said. “I react differently with my family … My interaction with people is completely different. As I look at things that happen in life, I can clearly see divine intervention.”

Eucharistic adoration has also given Patrick a greater longing to receive the Eucharist at Mass.

After he’d been visiting the chapel for a while, Patrick signed up to commit to an hour of prayer each week. At first, he felt a bit intimidated by the length of time.

“Within just a few visits, you realize that your hour goes by so fast,” he said.

Patrick’s holy hour generally includes informal prayers, reading and meditating on a Bible verse and reciting the Rosary and Divine Mercy Chaplet. Sometimes, he comes to pray for specific needs, such as a loved one’s illness. No matter what’s going on in life, Jesus is there in the chapel.

“The chapel is a refuge,” he said. “If you’ve got a problem, if you need help, if you need some counseling, there (the chapel) is.”

WHERE IS THE ADORATION CHAPEL?

WHEN CAN I VISIT THE ADORATION CHAPEL? WHAT ABOUT ADORATION AT MY PARISH?

You can visit the chapel at any time, day or night, to pray before the Blessed Sacrament. Many parishes have eucharistic exposition and/or open-door hours for prayer. Please check with your parish for these times.

WHAT DO I DO THERE?

You can pray silently in the way that is best for you: sharing your heart with the Lord and allowing him to speak to you, praying the rosary and/or Divine Mercy Chaplet, writing in a prayer journal or reading the Bible or a spiritual book are all great places to start. Eucharistic adoration also gives you the opportunity for contemplative prayer, to simply gaze at Jesus in the Blessed Sacrament and love him, and know his deep love for you. The chapel’s silence facilitates contemplative prayer. You can stop in for five minutes or stay for an hour or more. Most importantly, be patient as the Lord works on your heart.

WHAT IS THE PURPOSE OF MAKING TIME FOR EUCHARISTIC ADORATION OUTSIDE OF MASS?

While we praise and adore God in many ways, eucharistic adoration outside of Mass allows us to specifically adore Jesus who is truly present in the Eucharist. Eucharistic adoration, whether at the Adoration Chapel or at your parish, allows us to pray in the Real Presence of the resurrected Christ. It’s like spending time with a friend or loved one. Sometimes you don’t even need to talk; you simply sit and enjoy the Lord’s presence. Praying before Jesus in the Eucharist gives graces to your soul!

“You don’t have anxiety when you rest in the Lord.”

Elaine McPhail describes herself as someone who’s always “go-go-go.” The Adoration Chapel, however, provides her with the opportunity to pause, quiet her mind and spend some time with Jesus.

“That’s why I took the holy hour— to slow down, relax,rest and trust in (the Lord), because he has the answers to everything,” she said. “I would never give up my holy hours.”

Elaine has committed to three hours a week, including a midnight to 2 a.m. slot, which she particularly loves. She plans her day around that time with Christ, just as she plans her Sundays around Mass. During her time in the chapel, she prays the Rosary, Divine Mercy Chaplet and litanies, reads Scripture or other spiritual books, and spends time simply looking at Jesus.

“He’s the King of Kings. Sometimes you don’t need to say (anything), he can read your soul. Just lay your heart on the altar, and he will take care of the rest,” she said. “Sometimes it’s like these graces pouring on you, and you have no idea where it’s coming from. … When you need it the most, it’s there.”

“You don’t have anxiety when you rest in the Lord,” she said. Elaine said that along with frequently receiving the sacrament of Confession, praying in the Adoration Chapel has “made Communion even sweeter” by drawing her closer to Christ. Eucharistic adoration is a powerful devotion, but you don’t have to commit to a whole hour right away, she said. “At first, come in and rest in the Lord. You can just sit there. Don’t say a wor … and just come in five or 10 minutes,” she said. After gradually increasing the time spent in the chapel, “You find yourself desiring to come. … (God) draws you closer and closer to himself.”

The spiritual benefits affect more than just the individual praying, too, she said.

“You go out with graces and your family’s blessed. I’ve just seen so many blessings poured out on my family,” she said. In the chapel, she prays not only for her family, but also for people all over the world whom she will never meet but knows they are family in Christ. She offers their needs, too. “It’s like an audience with God.”

“There’s power in the Eucharist.”

Janet Hamling has been bringing her needs to the Adoration Chapel ever since it opened in August 1987. In fact, she even met her husband there.

She was about 30 years old, her mother had recently passed away, and Janet was single yet longing to be married and have a family. Recent relationships hadn’t worked out, and she was frustrated.

“I just said, ‘Okay, Lord, you want me to meet somebody? You’re gonna have to bring him to this chapel,’” she recalled. “Three or four months later, my future husband… came into the chapel.”

After seeing each other at the chapel and other church events for a while, he eventuallyfdesc introduced himself. They were married a year and a half later.

“God brought us together,” she said. Coming to the Lord with her needs and petitions has continued throughout her life.

“You have to believe that [in the Host in the monstrance] is God. And no man can do what God can do,” she said, explaining that she will bring God the problems of others she has tried to help. “You can only take them so far, and then you just give it to God. I’d go sit there and cry my eyeballs out: ‘God, you took me to the end of the rope. I can’t do any more for these people.’ And God has given me answers.”

For example, a family member with mental illness was homeless, and after pouring her prayers out in the chapel, an unexpected housing solution fell into place. “I’ve had many, many miracles,” she said. “You’ve got to believe that this is the true God that walked the earth and died on the cross. He’s there.”

Janet has relied on her holy hours through marriage and homeschooling her children. She also brought her children to the chapel, where they would spend 10 minutes when they were young.

Now, she goes to the Adoration Chapel whenever she can, even if it’s only for a few minutes.

“That’s where I get my strength. I’ll tell you, there’s power in the Eucharist,” she said.