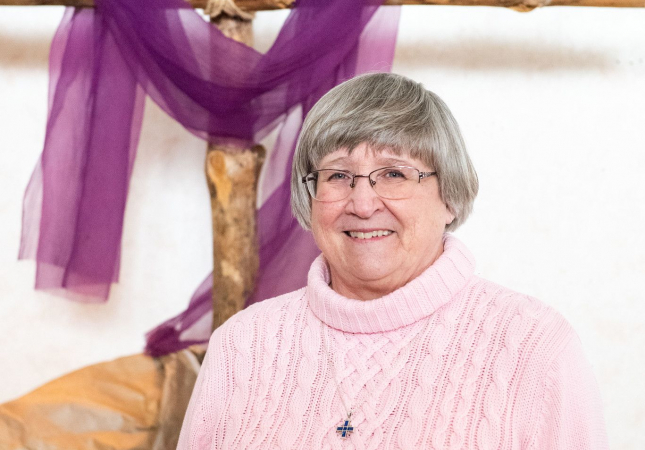 Once upon a time, in 17th century France, a humble Jesuit priest, Jean-Pierre Medaille, envisioned a new form of religious life for women. He called it “The Little Design.” His inspiration emerged from his reflection on the Gospels and the corporal and spiritual works of mercy. At the time, the only form of religious life sanctioned by the Church for women was the monastic life, which originated in the third century. Monasticism consisted of living in cloister (apart from the world), wearing habits, taking solemn vows and committing one’s life to continuous prayer.

Medaille believed that some women were called to live among and minister to “the dear neighbor.” They would serve the Church, under the patronage of St. Joseph, take simple vows of poverty, chastity and obedience, dress like widows of the day and reflect the charism of unifying love: bringing all people into unity with God and with one another. They would embrace a life of contemplation in action.

The Congregation of St. Joseph was founded in 1650, nearly 100 years after the Council of Trent. Religious wars resulted in many abandoned orphans and widows. Father Medaille met several faith-filled women willing to help alleviate the suffering around them and invited them to be part of “The Little Design.” Over the years, the “Congregation of the Great Love of God” increased in number, became present throughout the world and encountered needs of all kinds, causing new ministries to evolve. After the Second Vatican Council, religious were encouraged to study the roots of their founders and “re-examine religious life.” The Sisters of St. Joseph took that to heart.

In the 20th century, near Detroit, there lived a faith-filled family: Walter, Mary, three children: Tina, Cindy and Walter, and soon-to-be-born twins, Diana and David. April 22, 1956 was a special day. Tina would be receiving her first Holy Communion. She said a special prayer that day:

Tina loved going to Christ the Good Shepherd Church. Sometimes, she prayed for unbelievable things: that her mom would have twins and that the next baby born would be a boy. Exactly one month after her First Communion, the twins were born. Three years later, her little brother Paul was born. She was so pleased God answered her prayers; she thought she was special. Tina soon discovered that God did not always say “yes.” However, she still believed she was special in his eyes.

Soon she began praying, “God, what do you want of me? How can I best serve you?” Within her prayer life, she experienced God’s love and learned how to express that love for others. In high school, she began praying the Act of Love, which she still prays daily.

Tina soon discovered that God did not always say “yes.” However, she still believed she was special in his eyes."

Tina deeply desired to use her gifts in the Church. As a child, she often “played Mass” with her siblings. She was disappointed that girls were not allowed to be altar servers, and she wondered how she could be part of Mass. In sixth grade, she joined the Special (all girls) Choir that sang at Mass every Sunday. In seventh grade, she began playing the organ, which she continued throughout high school and beyond. She became very involved in the Mass and found great joy in it.

Walter and Mary realized that their daughter wanted to enter the convent. Both were supportive, with one stipulation: that she complete high school before making a final decision. The Sisters of St. Joseph of Nazareth taught Tina at St. Francis Xavier High School. She noticed a delightful quality among these sisters. They were down-to-earth and very friendly. Tina was drawn to their charism and realized that God was calling her to religious life. She recalled her prayer of long ago, wondering whether the Holy Spirit had inspired it and if God was initiating the call to religious life even then.

St. Joseph, as dreamer and contemplative, has inspired me. He has helped me appreciate that having my accomplishments recognized is not as significant as doing God’s work"

St. Joseph has a special place in my heart. Humble person that he was, St. Joseph, as dreamer and contemplative, has inspired me. He has helped me appreciate that having my accomplishments recognized is not as significant as doing God’s work, trusting my intuition is important, since God speaks through dreams. And by taking time for contemplative prayer, I can listen in stillness to God speaking to me. St. Joseph has motivated me to write and compose a song in his honor and to seek his intercession in prayer.

As a Sister of St. Joseph, I have served both in the Archdiocese of Detroit and the Diocese of Saginaw as music teacher, director of music and liturgy, pastoral administrator, associate for music and liturgy of the Diocese of Saginaw, instructor of sacraments of initiation in the lay ministry program, and presently, director of parish life at St. Catherine of Siena Parish. In preparation for those ministries, I received a bachelor of arts degree in music education and French from Nazareth College, a master of music degree in music education and organ from the University of Michigan and a master of arts degree in theology from the University of Notre Dame.