Religious life and ministry can be summed up with one word: love 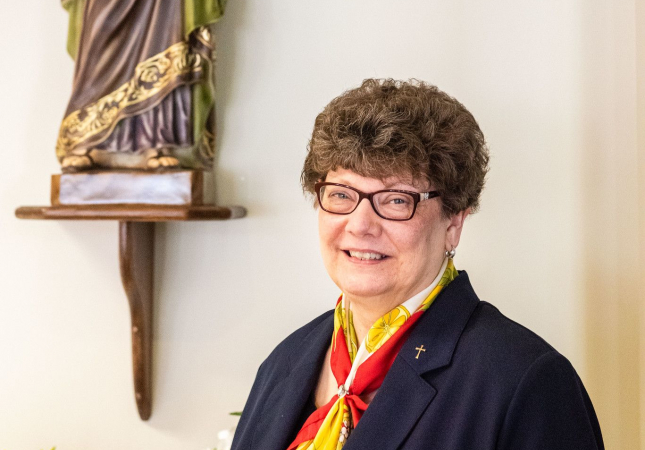 My vocation to religious life and parish ministry began in the fifth grade when my parents John and Edna Pewoski sent me to our parish school, St. Joseph School, in St. Johns. I prepared for Confirmation and found my prayer life deepening. I also was introduced to serving as a sacristan with my classmates by cleaning the sanctuary and sacristy and laying out the vestments for the next day’s Mass.

After Confirmation, I was asked how I might help, and I was given the name of a blind parishioner who resided at a local nursing home, so I would go to visit, write letters and eventually read aloud an entire book about the Titanic. I visited him regularly from fifth grade through high school, and wrote to him until he died during my first year of college.

During high school, I was active in church life. Catechism was held on Wednesday evenings and later shifted to Sunday evenings at parent homes. On Saturday mornings, I helped the fourth graders learn their prayers by breaking the prayers down into manageable sections to memorize and add on for the Acts of Faith, Hope and Love. I also attended and took a turn on the TEC retreat teams (Teens Encounter Christ), where I met and befriended sisters of various religious orders. In the end,

I joined the Sisters of St. Joseph, who had been my elementary school teachers, because I found them to be friendly, happy and holy."

I simultaneously began college and entered the Sisters of St. Joseph on August 21, 1968 and graduated in 1972 from Nazareth College (affiliated with the Sisters of St. Joseph) with a bachelor of arts degree in English and psychology and a secondary teaching certificate. I then taught for a year at Monsignor Hackett High School in Kalamazoo. My novitiate year began in August 1973, and I professed first vows on Aug. 11, 1974, the Feast of St. Clare, and final vows on April 29, 1979, the Feast of St. Catherine of Siena.

Many of you may recall that Vatican II began in 1962 and ended 1965, so I entered amid the numerous changes and transitions going on within the Church and religious life at the time. Our sisters shifted from full-length habits to modified habits, then to no habit after we discovered that our original sisters were simply wearing the widow’s garb of their time, which allowed single women to safely go out in public to minister.

I remember being moved to tears by Pope St. John XXIII’s efforts to call for unity among all Christians at the time, and I was also moved by the core Scripture that permeates the Sisters of St. Joseph based in John’s Gospel: “That all may be one as you, Father, are in me and I in you.”

My vocation and my mission are about knowing that I am loved by God and desiring to return that love to God and to his people, or as our founder Father Jean Pierre Medaille, S.J., would say “to the dear neighbor.” Our sisters began as women who taught poor girls the faith and how to make lace to earn a living. They would take stock of the needs of the local area and divide and conquer trying to help where needed. Our ministries have expanded from care of orphans, the sick, teaching and social work to hospitals, schools, social justice and, in the words of Father Medaille, “all that a woman is capable of.”

My vocation and my mission are about knowing that I am loved by God and desiring to return that love to God and to his people."

For the first part of my ministry, nearly 28 years, I taught in Catholic high schools in Flint and the Detroit suburbs. I gradually moved into campus ministry, retreats and pastoral ministry and faith formation roles at the parish. My subsequent degrees prepared me for this new ministry: master’s in journalism and American literature from Ball State University, Indiana in 1986; a certificate in theological studies in spirituality and worship from the Jesuit School of Theology at Berkeley, California in 1991; a master’s in Christian spirituality with a certificate in spiritual direction from Creighton University, Nebraska in 1996; and a master’s in theology from the University of Dayton, Ohio in 2003, as well as numerous certificates from Sacred Heart Seminary culminating in lay ecclesial certification.

The latter part of my ministry from 1991 to 2007 involved intermittent parish ministry while still working at the high school level. Then, Sister Chris Gretka contacted me to share that Bishop Robert Carlson was looking for pastoral administrators. I was in the middle of a dual contract at a high school and parish at the time, so I was not planning to move mid-year. I met with Bishop Carlson and he kept encouraging me to come. Though, right away, he remarked that he didn’t mean to “steal the sheep” from Detroit. After talking with my congregational leaders, the principal, and making sure
that I had all the service trips and retreats organized for the second semester, they agreed and supported my move.

I came to Saginaw in January 2007 and served at St. Matthew Church, Zilwaukee through June 2013. From July 2013 to the present I have been at St. John Vianney, Saginaw. I oversee the preparation of the sacraments, liturgies and religious education, as well as help provide oppor- tunities for parishioners to learn about and practice their faith.

In terms of Christ’s mission, we’re trying to proclaim the Word and invite others to practice the faith and come to the faith."

In terms of Christ’s mission, we’re trying to proclaim the Word and invite others to practice
the faith and come to the faith. We follow John 17, trying to let people know they are loved and they are one in the Father, Son and Holy Spirit.

Religious life and ministry can be summed up with one word: love.