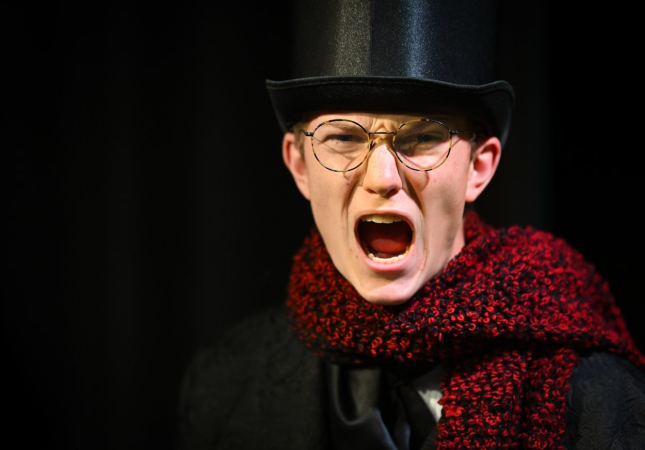 Reprint with permission from: Our Sunday Journal

A brief reflection on the scripture readings of the day written by Father Randy Kelly, senior priest of the Diocese of Saginaw.

In the middle of December, mid-Advent, Nouvel Catholic Central High School staged a production of A CHRISTMAS CAROL. The producer chose a “retelling” of Charles Dicken’s classic by contemporary playwright Patrick Barlow. The adaptation stresses the “conversion process.” Because I have known most of the cast since they were preschool students, I made a point of attending. The kids did an amazing job. The play was not only great entertainment, but, at least for me, offered a powerful insight into the mystery of the Incarnation.

Towards the end of the second act, Scrooge (played by a young man whose entire family I am particularly close to) finally understands the error of his ways. More importantly, he realizes that time is running out for him, and that death is close. In a highly dramatic monologue that was brilliantly delivered by the young actor, Scrooge calls out…I WANT TO LIVE! I WANT TO LIVE SOMEONE PLEASE HELP ME…I WANT TO LIVE! It was intense and certainly seemed to me that this heartfelt plea went on for several minutes. In fact, Scrooge actually left the stage and walked down the center isle and into the darkened theatre, looking right into the faces of the stunned audience and desperately repeating those lines. I doubt anyone so much as took a breath. No one made a sound. Appreciating my own reaction (my heart was in my throat), I began to think about the actor’s parents. I imagined how moving it was for my friends to hear their child pleading for his life…begging for help. In fact, after the play, his mother said that she could not hold back her tears. In truth, I doubt many could or did!

And then, out of the darkness, a very little girl in the front row shouted out in her sweet, young voice what every single person in the theatre was probably thinking: I’LL HELP YOU! Her mother quickly silenced the little girl. At first, it wasn’t clear whether her line was “scripted.” But as Scrooge continued undaunted by the interruption, it was clear that this uninhibited child gave voice to what we adults were all feeling. We all wanted to stand up and shout out: I’LL HELP YOU!

The entire production was memorable. But it was the profound response of an innocent child to the extreme suffering of the actor that stuck with me. That, and the image of a parent watching her child pleading for help. After a few days of reflection, it occurred to me that what I had seen was far more than entertainment. The completely unplanned reaction of the little girl to the anguish of a repentant and desperate sinner left me, anyway, with a meaningful insight into the mystery of the Incarnation. Since the early stages of creation, the entire universe has been calling out…I WANT TO LIVE! I WANT TO LIVE! SOMEONE PLEASE HELP ME! I WANT TO LIVE!

Above and beyond…watching this heart-wrenching drama from eternity, The Creator, much like the parents of the young actor, was moved beyond telling. Finally, God reacted to the cosmic plea for redemption…for help…for life! The Creator took action. God spoke into the earthly body of a young woman the most powerful Word imaginable. And that Word…God’s Eternal Word…took Flesh. The Christ-child was born. The first sound…the very first cry that came from the newborn’s mouth rang throughout creation carrying the message: I’LL HELP YOU!

Jesus is God’s reply to creation’s desire to live. And The Lord’s assurances of Divine assistance have continued to echo throughout the centuries. But the voices of the faithful are called to become part of the heavenly chorus that first announced the Christ-child’s birth. When we hear that cry…no matter from where or from whom…I WANT TO LIVE! I WANT TO LIVE! SOMEONE PLEASE HELP ME…I WANT TO LIVE! Disciples are charged with the responsibility of responding: I’LL HELP TOO!

There are many traditions…and decorations…and songs that “make the season bright.” And there is certainly nothing wrong with joyfully celebrating Christmas, so long as we do not lose sight of the real meaning of the Incarnation. The very first cry that came from the mouth of that newborn Who came into this world in the most humble of circumstances was the Creator’s response to all of creation: I’LL HELP YOU! There is no carol or hymn or card or story that better captures the true meaning of this very holy night than those simple words…I’LL HELP YOU! Words that should be on our minds, and on our lips, and in our hearts…not just during this Season…but all year long.