Bishop Gruss: We are at a critical moment in the history of the State of Michigan 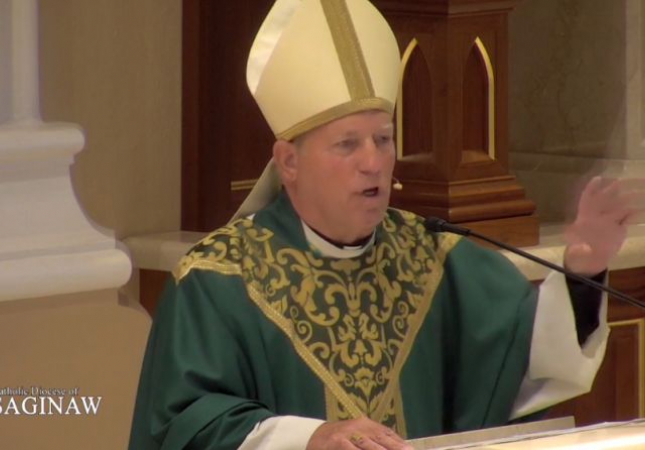 Friends, we are at a critical moment in the history of the State of Michigan.

One of the greatest challenges facing the voters in Michigan in the upcoming election is the Reproductive Freedom for All initiative that will appear on the ballot as Proposal 3.

It is the most radical abortion legislation in the country. More accurately termed, the Anything Goes Abortion Constitutional Amendment is so devious and presents such a grave concern for the unborn, pregnant women in need, children, and parents. This effort is spearheaded by Planned Parenthood and the American Civil Liberties Union.

The most extreme abortion proposal in the country

This is what will happen. Voters will be asked if the state constitution should be amended to create a right to abortion throughout pregnancy with no regulations, no opportunity for the legislature to change the law, and no limitations on who can obtain an abortion from any person, at any time, without consequences. It would also affect parental rights regarding an abortion involving their children.

This is the most extreme abortion proposal in the country, similar to what is allowed in China and North Korea. Catholic engagement is necessary to defeat this proposal and its grave consequences.  To change the Michigan Constitution is very serious in and of itself. We should reject this proposal on that basis alone.

The devil is in the details

Not to mention, the language on the ballot itself says it will “invalidate state laws conflicting with this amendment.”  Neither the amendment nor the summary text, however, details what state laws will be invalidated. The devil is in the details.

Over the next five weeks, I have asked the pastors to join me with all hands on deck in getting the word out regarding what exactly is in this ballot proposal and why this is horrific for the State of Michigan. Every diocese throughout the State of Michigan will be engaging our Catholics as to why we should vote No to this proposal.

By virtue of our baptism, we are called to speak in a united voice in charity, truth, and justice. This is not a political issue. It is a moral issue and, more importantly, a human rights issue. We believe that abortion is wrong, not because we are Catholic. We think abortion is unjust because it is the killing of an innocent human being. This doesn’t come from the Catechism; it comes from science and medicine.

And significantly more money will be spent during the campaign with pro-abortion elected officials and advocacy groups across the country ready to barrage Michigan voters with their propaganda in the weeks to come. We are already seeing the ads on television.

The pro-abortion lobby will do everything it can between now and November 8 to hide the extreme elements of this proposal. This is also why it is important for all of us to get the word out – telling our family, our friends and our neighbors – the truth about this ballot initiative. At present time, most Michiganders don’t know about the Reproductive Freedom for All initiative – Proposal 3, but when they do know about it, how could anyone in good conscience vote for it?

Briefly what does it allow? The devil is in the details.

These are just some of the things that, if this proposal goes through, would be enshrined into the Michigan Constitution. If this proposal were to pass, Michigan would immediately become one of the most permissive, anything goes abortion jurisdictions in the country. Other states are watching!

What can we do? Let’s ban together across the seven dioceses of Michigan and “Fight Like Heaven” to defeat this radically, extreme abortion proposal. This moment is an invitation and opportunity for all of us to bring this proposal into the spiritual realm of our lives through prayer and fasting.

It’s not too late to pray the "Fight Like Heaven 54-Day Rosary Novena." Secondly, engage your circle of influence regarding this Proposal. Thirdly, register to vote and then vote NO.

For more information about this novena and our Vote NO to Proposal 3 campaign, go to our diocesan website – www.saginaw.org or the Michigan Catholic Conference website – www.micatholic.org

MCC has co-partnered with Right to Life of Michigan to defeat the proposal. The group is called Citizens to Support MI Women and Children. Their website is www.supportmiwomenandchildren.org.

To live our faith is to put our money and time where we can protect the most defenseless among God’s most vulnerable of creation, the unborn. Our willingness to love, give and sacrifice reflect the way in which we embrace our call to hold life sacred from the moment of conception until the natural end.  Let us all follow the example of Jesus and care for the most vulnerable among us, both mothers and babies, born and unborn.

Mary, Mother of Life, pray for us.